Ovens are an essential part of modern households. Today they are more ubiquitous than hearths, even though they often become the center of domestic activity. Early people huddled around their fireplace might be shocked to learn that most people cook their food in a dedicated heating appliance instead of directly over the coals. Perhaps some of us were just as shocked when smart ovens like the Brava Oven began to hit the shelves.

We had many questions about Brava Ovens and smart ovens in general. All evidence suggests that products like the Brava Oven have taken the modern kitchen by storm. However, we wanted to test the claims that Brava makes against the claims of its competition to discover which smart ovens are actually worth their money.

WHAT IS THE BRAVA OVEN?

The Brava Oven is a countertop oven appliance about the size of a toaster oven that works remarkably quickly. It can bake, toast sear, and air fry. You can even use your Brava Oven to dehydrate food, which is an incredible feature for anyone who grows their own mushrooms.The Brava Oven uses internal cameras to watch you meal while it cooks. You can stream the footage of your nachos getting melty directly from your oven to your smartphone. Suddenly, there is no need to get up from the couch every five minutes or so to make sure that the pizza isn’t burning. It makes you feel like you are living in the future.

SOME OF OUR FAVORITE FEATURES

One of the many great features that the Brava Oven boasts is that it comes with a long list of automatic cooking settings. Just about anything you can imagine cooking is likely already a preset on the Brava Oven. This can helpfully cut down on the time spent Googling or thumbing through recipe books to find the right cooking temperature for a new dish.Surprisingly, one of the features we used the most was the Brava Oven’s built-in reheat function. Leftover pizza always comes out a hundred times better from the oven than it does from the microwave. The leftover pizza we warmed up in our smart oven was even better. We found that this reheat feature worked so well on pizza slices that it quickly became our go-to setting when the first round of mozzarella sticks got cold.The scrupulous chef will be glad to know that the Brava Oven comes with a meat thermometer. The oven itself knows the temperature of the air inside it, so you can compare how hot the oven is with how well cooked your meat is becoming. This is where the smart features really shine.

THE OVEN OF THE FUTURE

The touch screen that operates the Brava Oven looks great. It blends right in with your modern smartphone. The temperature displays are easy to read and attractive in their own right. The whole appliance is handsome, in fact. It is a sleek metal box with rounded corners and a matte aluminum shell. It looks better than some top of the line models of laptop.

HARNESSING THE POWER OF LIGHT

We’ve talked about so many great features of the Brava Oven, we haven’t even mentioned the craziest one: it uses light to cook your food. That’s right, the Brava Oven is not a convection or conduction oven, it is an infrared and visible light oven. We all know that solar technology is the future in terms of powering our devices, but the revolution into light-based technologies will not stop there. If trends continue, most ovens will cook food with light. You can join that future now.

The Brava Oven measures 11.4 by 16.4 by 16.0 inches. It’s cooking compartment that you gain access to by pulling on its single handle has the following dimensions: 6.4 by 13.0 by 12.5 inches.The control panel is a 5-inch long, 834 by 480 touch screen. The large circular button next to this screen is surrounded by a light ring capable of producing a multitude of colors.In terms of temperature, the Brava Oven can go from zero degrees to 500°F nearly instantly. You do not need to preheat thanks to the light technology that the Brava Oven uses. The easy to download app that can be used to monitor and control your Brava Oven is free.

We picked a few similar products available on the market to see how they compare. 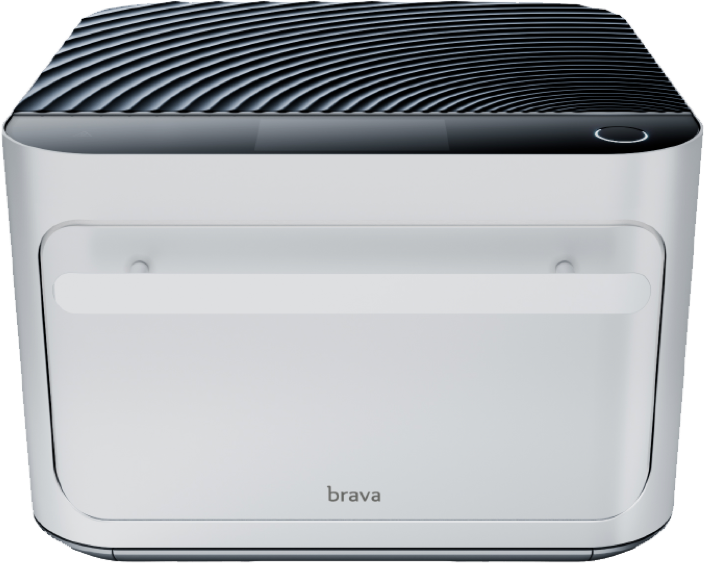 We love it when a smart device does the thinking for you. We were not familiar with the cooking times that a light based oven used vis-a-vis more traditional ovens. This was never a problem, however, since the touch screen was easy to understand and the oven came with every cooking preset that we needed.

With the Brava Oven, you have a whole slew of smart features. For one, you can use its internal cameras to monitor your food through your smartphone. You can read the temperatures both of your meat and the air in your oven. Its extensive library of cooking presets really cannot be undersold.

We never ran into a problem with performance in all our use of the Brava Oven.

The design is simply beautiful. Even if this device did not cook delicious meals, it would still look great on a kitchen counter. The rounded edges are sexy, and the matte aluminum finish is just gorgeous.

The Brava Oven and all its accessories are covered by a one year warranty. This is nice for peace of mind. It is not the longest warranty on an oven, however.

Whereas the Brava Oven has a sleek “Star Trek” sort of look, the Breville has more of a “Star Wars” vibe. Compared to the Brava and the Hoover, the Breville is absolute festooned with physical knobs. Don’t let this throw you off, though. It still offers many smart features such as the ability to sense the temperature of your food and to adjust its cooking temperature accordingly. It really excels as a budget option, although it does look cheaper than other models.

Some of the knobs are less than intuitive. However, for the most part this oven is easy to use.

They really pack a whole suite of smart features into this oven. It can adjust each of its heating elements independently.

This smart oven has enough room to hold a whole turkey and a tray of vegetables at the same time.

This is the category where this oven falls short. Some people will like its more “punk” aesthetic, but it does not look as sleek as the Brava Oven.

This smart oven comes with a two-year warranty.

The Bosch Serie 8 HRG676956B is able to hold a respectable amount. It uses a “4D hot air system” to circulate heat throughout its cooking area. If hooking your oven up to your Wifi is a priority, this may be the oven for you. It will communicate with the Bosch Home Connect app to allow you to control its functions. Keep in mind it is a built-in oven not a table top oven.

Hooking up the Bosch Serie 8 HRG676956B was much more involved than with any other smart oven we reviewed.

You can connect this oven to your smartphone to control it. However, it does not provide HD footage of your food.

It performs better than expected as long as you set it up properly.

The touch control and dial design struck us as unfocused.

This model is covered for a yearlong warranty period.

We knew we would be hard pressed to find a smart oven that was more attractive than the Brava. We were surprised to learn that the best looking oven is also the highest performing in its class. If you have the money, there is no better smart oven than the Brava. It alone harnesses light to perfectly cook its food. When it came to identifying which smart oven truly deserved praise, only the Brava could cut the mustard.

Kiss the days of pre-heating goodbye! You can join the new wave of oven technology and begin cooking your food with light. Soon everything will be monitored on your smartphone, but right now you can make the leap and begin monitoring the food in your oven.

As a participant in the Amazon Services LLC Associates Program, this site may earn from qualifying purchases. We may also earn commissions on purchases from other retail websites.